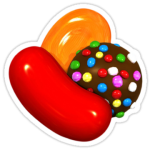 There is also a new Dreamworld section which incorporates levels 96-110 and it looks like it may go on further, but it is difficult to tell until the first section of levels is complete. This section has four games where you have reach a target score, nine where you have to clear the jelly and two where you have to get the ingredients down to the bottom. Comparing these to levels 96-110 on the original game, they follow the same pattern of requirements per game except for level 108 which originally was a timed game, but there seem to be no timed levels in the Dreamworld section of the game, probably too difficult to work quickly and keep a watch on Odus at the same time. Level 108 is now a clear the jelly level instead.

This means that there are now 30 new levels to play on Candy Crush Saga. The Dreamworld levels tend to be copies of the original levels but just incorporating Odus the owl to make them even more difficult. However, the main game levels are likely to be unique. With no timed levels, they will hopefully not be too annoying either, but until they get played there is no way of telling.

The levels are only available on the Facebook version of the game at the moment, although the android version of the game has updated somewhat so that Dreamworld goes up to level 95 but the main game is still stuck on level 500 at the moment. It seems like Apple apps are at the same stage as well, which means that unless you play the game on your PC through Facebook, you may have some more time to wait before you get the new levels.

We will add some walkthroughs for the new levels but you will have to be patient as we will need some time to complete them first! Hopefully they will keep us all entertained for a nice long time but will not be too irritating!