You are here: Home / How To Play Candy Crush Saga

Candy Crush Saga was one of the most popular games in 2013 and possibility EVER. With millions of players, it easily sky rocketed to one of the biggest online gaming phenomenons in quite some time. Candy Crush Saga was built by King which is a popular game developer. If you have never played Candy Crush and are looking to get started, you have found the right place. Below is a extensive guide on how to play the game.

Candy Crush is a popular game based around candies. During the course of the game, you have to make sets of three or more candies in order to remove them from the board. This will help you to complete the various levels. Each level will give you a challenge, such as getting a certain score or letting certain items drop to the bottom of the game board. You will be told what you have to achieve at the beginning of each level such as in the picture below: 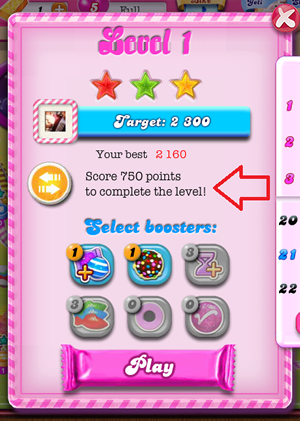 There is even a reminder at the side, while you play. The example below shows that you need to bring down 7 cherries to win, for example. On level one you will get the following board: The aim of this level is to score over 750 points. You will get a reminder of this if you hold the mouse pointer over the yellow circle to the left of where it says ‘Level 1’ at the top. In order to score points you need to make combinations of candies of the same color with three or more together. For example, at the bottom corner there are purple candies, three of which are brighter than the rest. By pulling the middle one up, it can make a row of three. This will then disappear, the candies will move down to fill the gap and new ones will fill in at the top. The screen will now look like this: You can see that the score has now gone up to 60 points. You may also notice that above the score the number of moves is showing as 9, this has reduced from the original 10. The amount of moves varies depending on the level that you are playing.

In order to score higher, you can make combinations of more than three candies. If you look, there is a group of yellow candies on the top right. The far right one can be moved in to form a sideways ‘T’ shape. This forms a special candy which is wrapped, as can be seen below: Another way to make a wrapped candy is to make an ‘L’ shape with the candies such as would be made below by moving the bottom orange candy upwards: 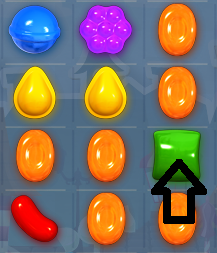 To activate this wrapped candy you have to make a row of three the same colour, so in this case three yellows, one of which is the wrapped one.

This will not only clear the row of three yellows but a three by three square of candies with the wrapped sweet in the middle.

Another special candy can be made by making a row of four candies: By dragging down the higher yellow candy a row of four can be made a striped candy is formed: 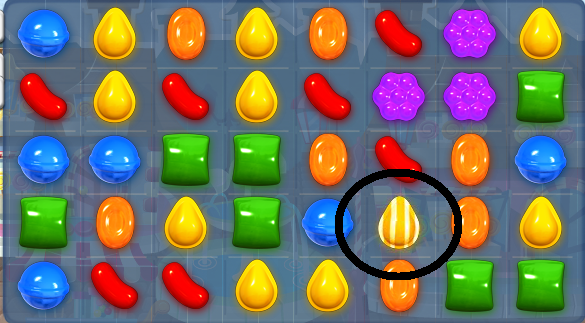 If you form the striped candy by moving a plain candy downwards then it forms vertical stripes. If you make one by moving a candy across it makes horizontal stripes. This has an effect on its special properties.

By forming a row of three with the vertical striped candy shown above, it will clear the whole of the column that it is in. This is shown below: The candy is in the process of shooting upwards and clearing the column third from the end. The three yellow candies have also disappeared and the existing candies will move down and the gaps filled with new candies.

Another special candy is the color bomb, which is formed by making a row or column of five candies. This could formed by moving the bottom blue upwards in the picture shown below:

The color bomb can be used to remove every candy of a certain color. It just has to be swapped with the candy that you wish to remove.

In the example below it has been swapped with a green candy: By combining special candies together you get even more benefits.

Two striped candies can be swapped together : They will remove a whole row and whole column:

A striped and wrapped candy will produce a large striped candy that will remove multiple columns and rows: 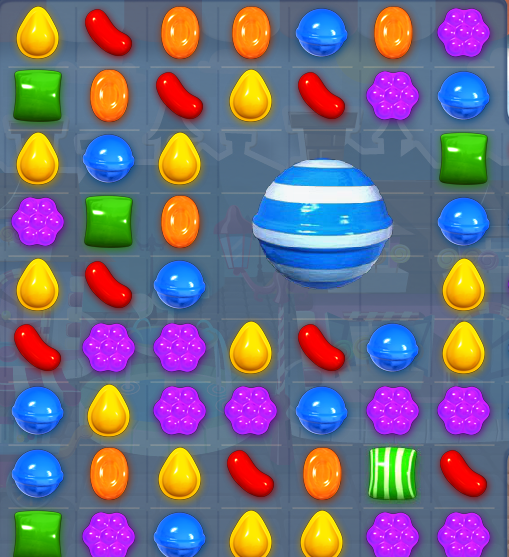 It forms a giant striped candy which removes three columns and three rows of candy.

Two wrapped sweets together will remove an area of 12 candies: Color bombs can also be mixed with striped or wrapped candies for special effects. If a color bomb is swapped with a wrapped candy then it will explode every candy of the same colour as the wrapped sweet and then explode those squares again: Swapping a color bomb with a striped candy: This will cause every purple candy on the board to turn to a striped one and they will be activated: Two color bombs together will clear all of the candies from the board.

This will create the following effect….